A beautiful and spacious Grade II listed semi-detached house in the conservation area of old Rustington; Walnut Tree House is a comfortable home sleeping 8-10 with a small secluded garden, only two minutes walk from ‘The Lamb Inn’, three minutes from local shops and 500 yards from the beach. Walnut Tree House is ideal for family get-togethers, celebrations, or as a base to explore the many varied attractions of West Sussex.

Walnut Tree House is possibly the oldest property in Rustington dating from the 15th Century. Until the fifties it was a working farm but slowly the land was sold. Originally a medieval timber frame hall house. In Georgian times a new front door and portico added. The house was refaced in flint when 2 inglenook fireplaces were added.

In late Victorian times the bay windows were added and the leaded light windows. In about 1910 the house was renovated and 2 mill stones from the demolished Rustington Windmill were placed as fire hearths.

Walnut Tree House was owned by the Kibblewhite family from 1835 who were celebrated glass manufacturers and in the early 20th century Thomas Hulme, the celebrated 1st world war poet regularly visited the house.

Until 1983, when the current owners arrived, the house was lived in by a member of the Bowes Lyons family who was married to a Colonel Sparrow. In 1960, he was notoriously stabbed by his lover! 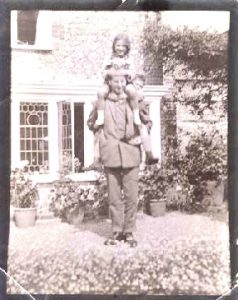 The girl on Thomas’s shoulders is Diana Poulton nee Kibblewhite, who became a celebrated Lutenist

Though it is believed that there was a former dwelling on the site, there is evidence of Walnut Tree House being constructed in the late 15th century as a farm house of the type known as Wealden. The agricultural land was extensive, stretching towards the coast to the south.

When first built it was an example of a three hall house. The middle hall being full height and the wings having two floors. The entrance door opens into a cross passage, which is divided from the hall by short screens at either side of a wide opening. The fire would have originally been on the open hearth, producing as much smoke which deposits a thick layer of encrusted soot on the beams.

The upper room, traditionally known as the solar, probably provided the family’s private bed-sitting room, while the lower room (which became known as the parlour) may have been used variously for sleeping, storage and working.

At the lower end of the hall would have been two service doorways with arched heads, opening into the two service rooms – traditionally called the buttery and pantry. These rooms were for storing food, vessels and utensils. A third doorway at the back of the house would have opened onto stairs leading to the service chamber.

The house has been changed and modernised in every century since to give what it is today. The wattle and daub was removed in 1680 and replaced with a flint facade, whilst at the same time an internal fireplace with a large chimney breast of very distinctive and rare ‘crow stepped’ design, whilst a two storey extension was built to the south, perhaps adding a kitchen as there is evidence of a bread oven. 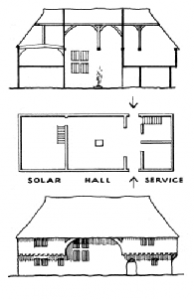 In Georgian times the door and portico were added together with the square lead roofed bays to the front and north elevations. Later the staircase was moved to the back of the hall and the roof removed complete and the third story added within this roof space. In Victorian times, all the glass in the windows was replaced with the stained glass and painted roundels by the celebrated stained glass company of Ward & Hughes.

At the turn of the 20th century, a further extension was built to the south, being three storeys, the top floor being two rooms for servants quarters. There was also a basement, outside toilet and heated vinery/green-housing. Also a bathroom was added to the first floor, and an indoor toilet to the rear of the property. Finally in 1983, the adjoining double threshing barn was developed as a terrace of four houses and the cow shed demolished. 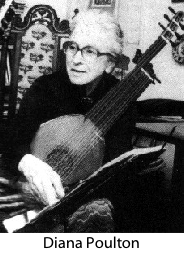 The families who have lived here

We are trying to research the owners and occupiers of Walnut Tree House over the last 500 years. We do know that the family of Thomas, a yeoman resided here during the enlargements of 1683. Then there is a blank until Thomas Figgis Curtis (1845-1924) moved-in in around 1865. He was succeeded by the Kibblewhite’s who lived at Walnut Tree House until the early 1903’s. Ethel Kibblewhite was a close friend of poet Thomas Hulme.

Thomas Ernest Hulme (16 September 1883-28 September 1917) was an English critic and poet who, through his writings on art, literature and politics, has a notable influence upon modernism.

Diana Poulton (18 April 1903 – 15 December 1995) was an English lutenist and musicologist. A leading member of the early Music Revival and associate of Arnold Dolmetsch, she played a key role in the revival of the popularity of the lute and its music.

Then there is a further gap until the mid 50’s when Colonel (1911 – 1970) & Mrs. Sparrow moved in both ending their days here with Mrs. Sparrow dying in 1983. She was a character who kept chickens in the adjoining barn and sold farm produce from the kitchen window. She also sold off most of the land.

On 4th April 1960, Colonel Sparrow was stabbed (not fatally) by his ‘mistress’ who had moved into the flat to the rear of Walnut Tree House. Anne Burnaby, 37, a cousin of Mrs. Sparrow was a former Hollywood film script editor who had suffered a breakdown 3 years earlier. She was jailed for 1 year. Col Walter John Sparrow was also eccentric in that he owned a succession of Aston Martin sports cars and when he became unable to drive on the roads, regularly drove around the gardens. Mrs. Sparrow (???? – 1983) was a member of the Bowes Lyons family.

We believe that Mrs. Sparrow had a far longer relationship with the house and that she lived with her first husband. When redecorating the ground floor WC room, the 50’s wallpaper was stripped off to reveal the entire room papered with the newspapers featuring the abdication of Edward VIII in 1936.